Dates:
July 8-10, 2014
Peaks:
Vermillion - 13,894 feet (failed)
Fuller - 13,761 feet
"V2" - 13,309 feet
Partners:
Brad (Mountain Ninja)
Molly
I'd been looking forward to the Ice Lakes Basin trip since last year. After seeing so many beautiful pictures of the area, I was excited to go do some fun hikes and capture some of the breathtaking beauty. My friend Zach insisted that this was the most beautiful place all of Colorado. I'm inclined to agree with his statement after witnessing it myself.
After a wet night camping in a tent I bought from Wal-mart which leaked along the seems, (1st lesson: don't buy tents from Wal-mart) we started up to Ice Lake before dawn. I was able to catch one of the most stunning sunsets I've ever seen. The sun came out between some clouds and turned the peaks super red! 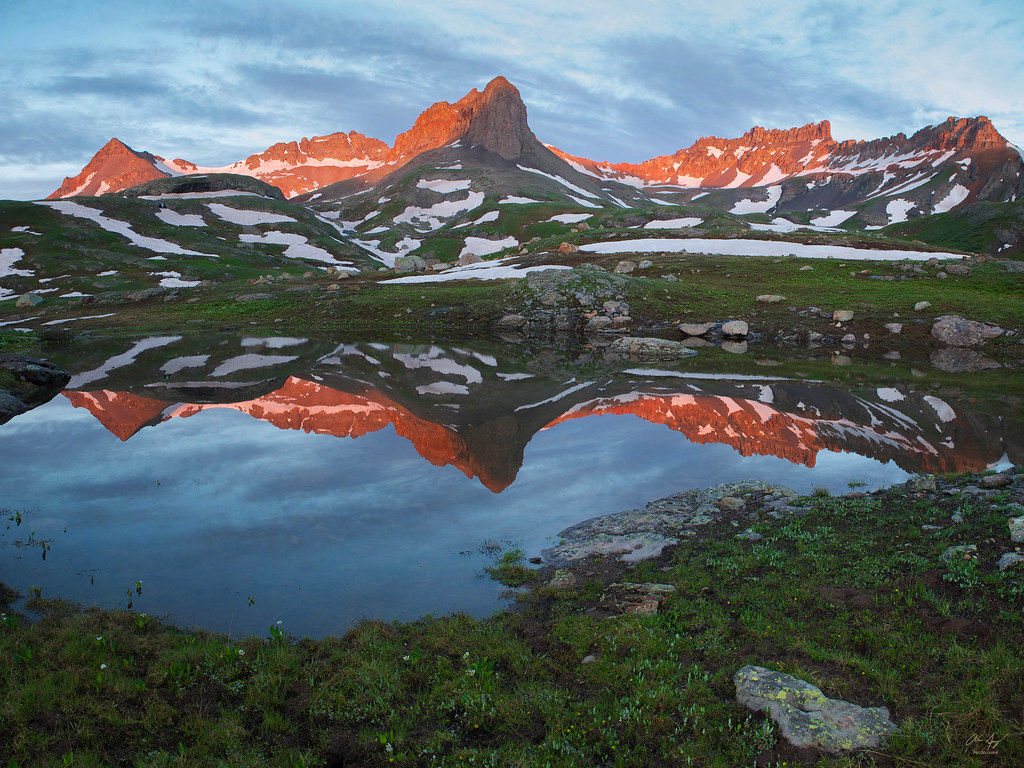 Time-lapse of sunrise on Ice Lake
After shooting a bit we headed up to the Vermillion/Fuller saddle. This would be my first real snow climb. Brad was a great teacher/leader who patiently showed me how to correctly use my snow gear. The snow climbing went slow and was quite steep, but never exceeded my comfort level. Actually, it was a blast! I am looking forward to doing more next season. 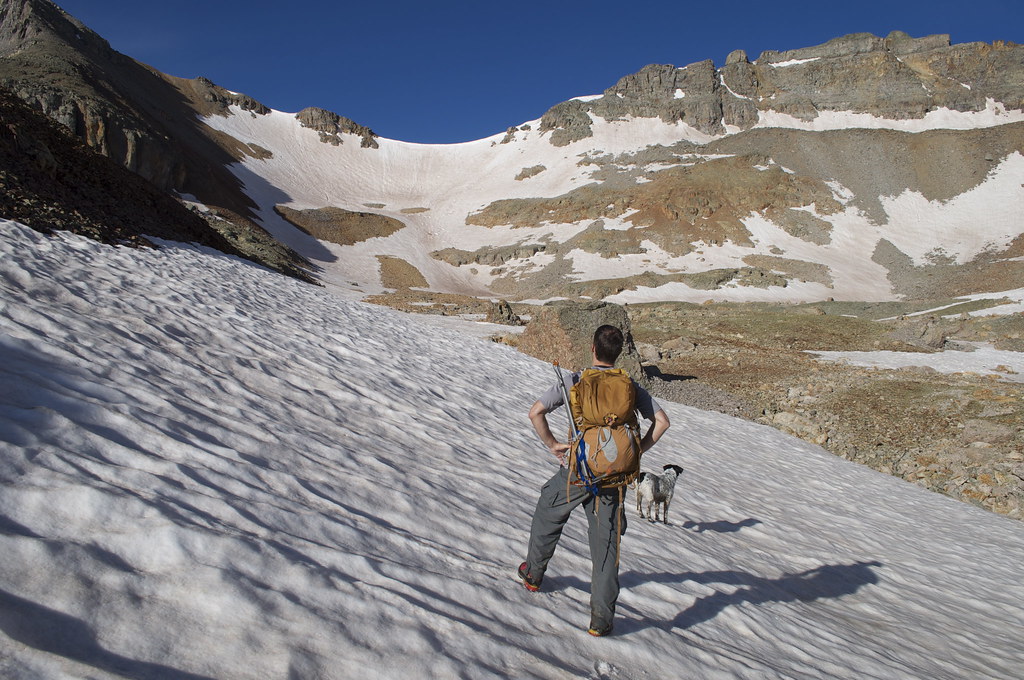 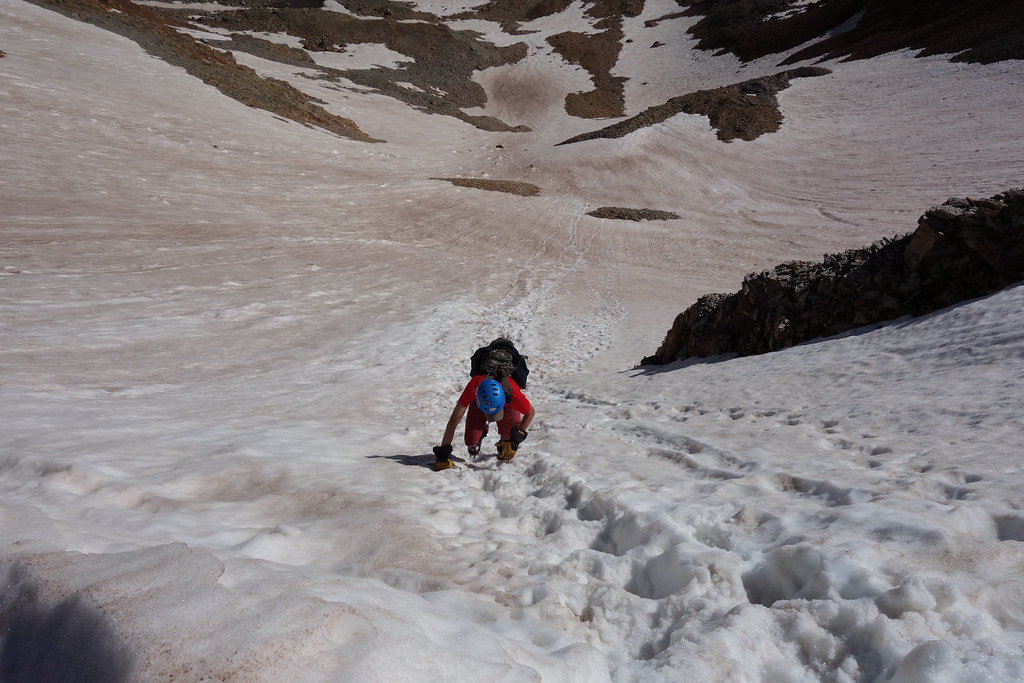 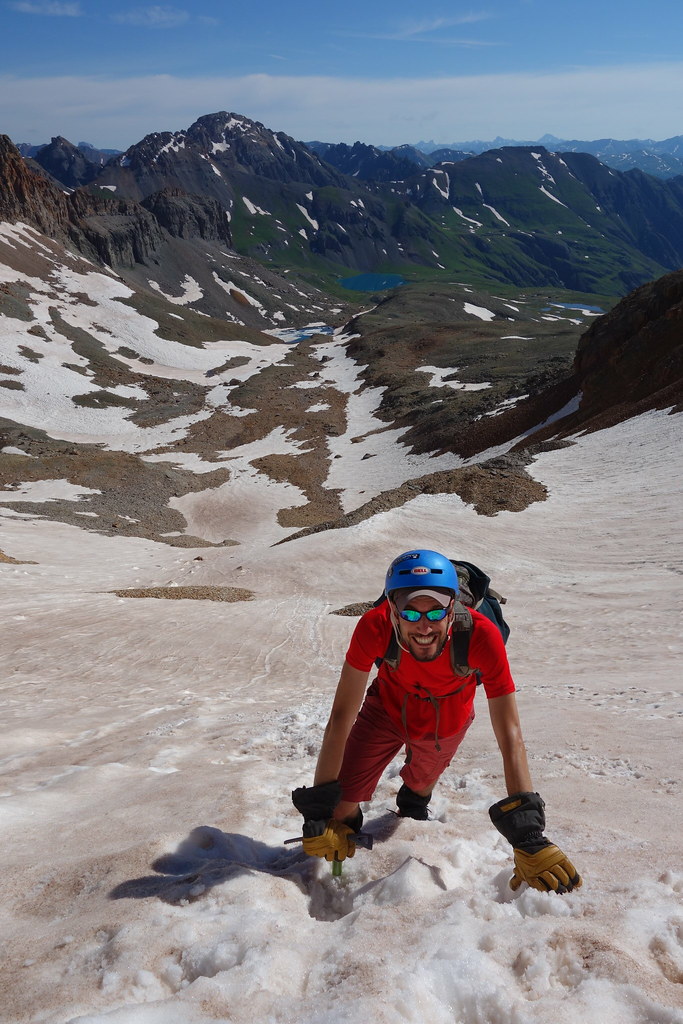 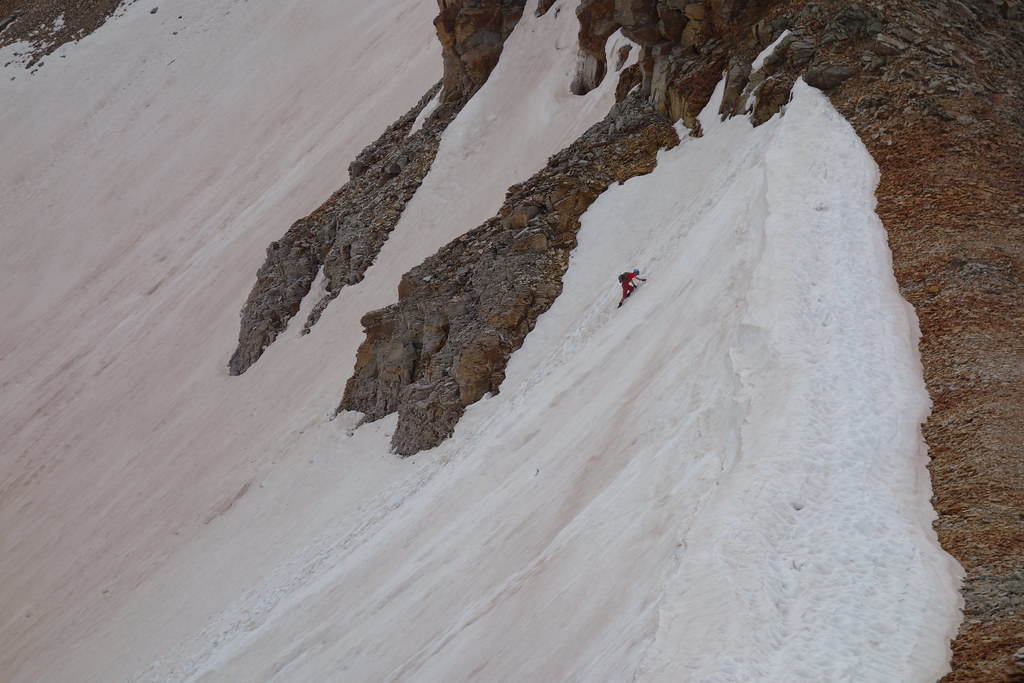 Once we reached the saddle, we stashed our gear thinking the rest of the route up Centennial 13er Vermillion Peak would be dry (2nd lesson: always bring your snow gear if there's a chance you'll need it). We hiked up the loose trail toward the summit. A few spots had some exposure, but nothing too bad until we came to a traverse with steep terrain just below the summit. At this spot, there was a key step or two that was covered with ice. I didn't feel comfortable crossing here. We searched for a way around, but couldn't find any that didn't involve loose dangerous exposed climbing. We decided we would have to descend back down to the saddle, grab our gear to give better traction, and come all the way back up again.
Back down at the saddle, we decided to quickly run up unranked Fuller Peak before trying for Vermillion again. This didn't take long and the views were incredible!

Summit pano from Fuller Peak
Back down at the saddle again. By this point clouds were building and I decided to bail back down the snow as not to get caught in a bad weather situation. Brad, being the determined karate master that he is, went back up solo to get Vermillion. Once down on the trail, I sat and waited for him to race the clouds. He summited and radioed me to let me know he was on his way back down. Once he returned, we started hearing thunder and moved briskly back down to Ice Lake, then down to our tent. Just before we reached our tent it started hailing. The hail turned to rain just in time for us to seek shelter. YES! Oh...wait....my tent leaks. The rain poured down for the next 3 hours making conditions in my tent quite miserable. My dog Molly was soaked and shivering and smelly. I shared my sleeping bag with her to warm her up. The rain finally stopped enough to get out of the tent and eat some food before dark. 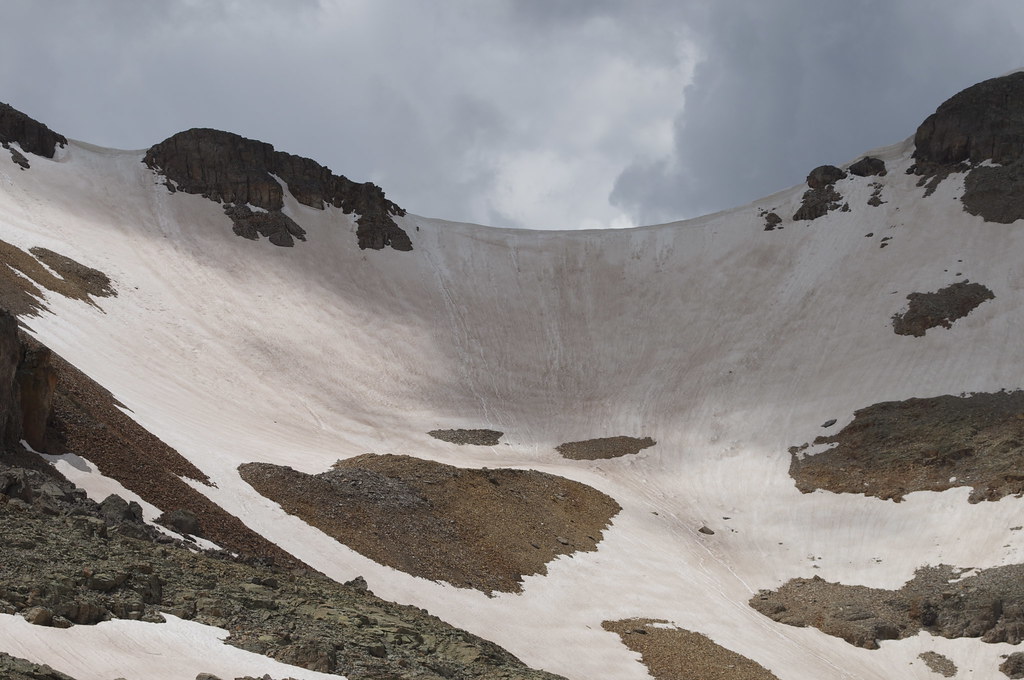 Can you spot Brad? He's the dot on the snow toward the top.
The next morning, my boots were still soaked from the previous day. This area of the state is pretty wet I think. I'm sure that's why it's so green. We started hiking again pre-dawn toward Island Lake. 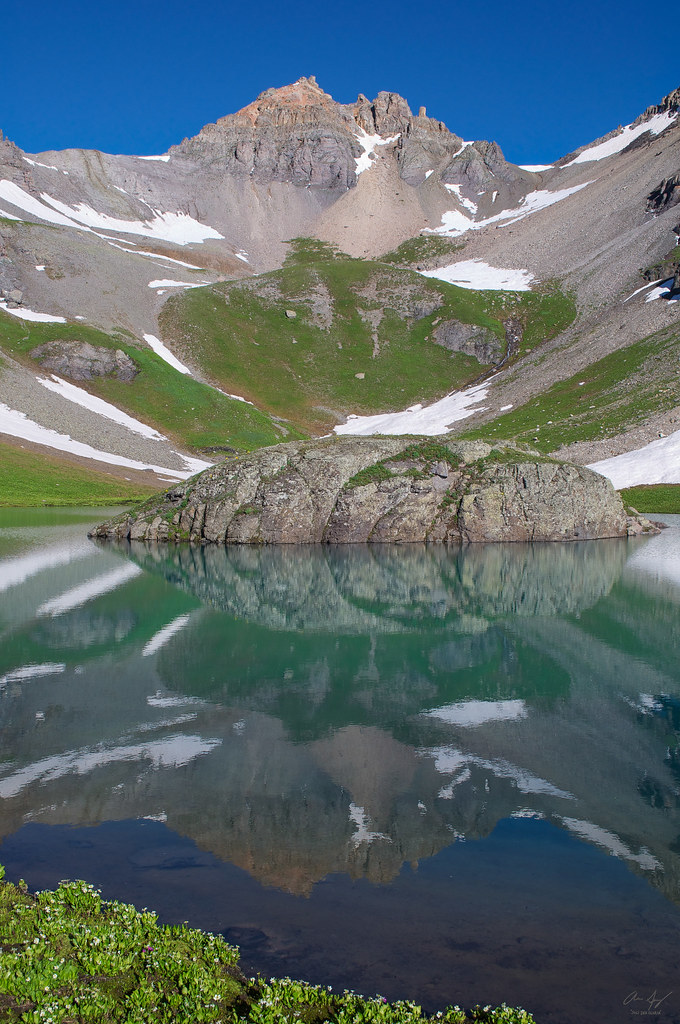 Island Lake
Once we reached the lake, Brad went up "V4" and I went up "V2". We each reached our summits at about the same time. The scene from "V2" has to be hands down the best summit view I've ever seen. You can spot about all the San Juan 14ers from this area. 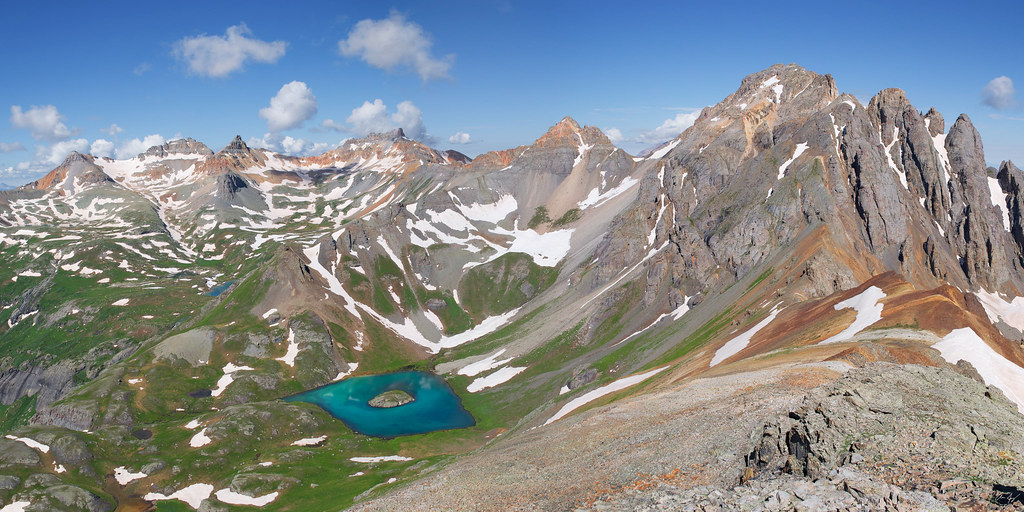 Summit pano from "V2"
The hike down was uneventful and took about twice as long as it should because I had to stop like every couple minutes to take pictures of all the wildflowers and waterfalls. This is up there as one of my favorite places. Lord willing, I will return someday soon and bring the family. 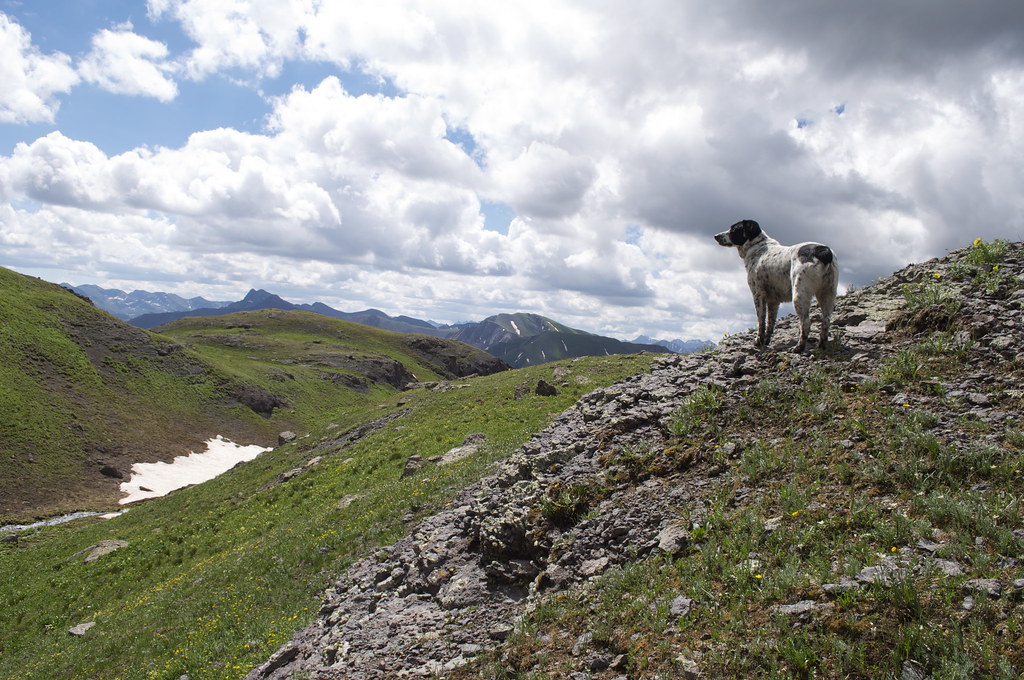 Molly
If you want to see more Ice Lake Basin photography, check out the Ice Lakes gallery on my artist website:
Ice Lakes Basin Gallery
Thanks for reading!
Posted by Spong0949 at 7:44 PM No comments: 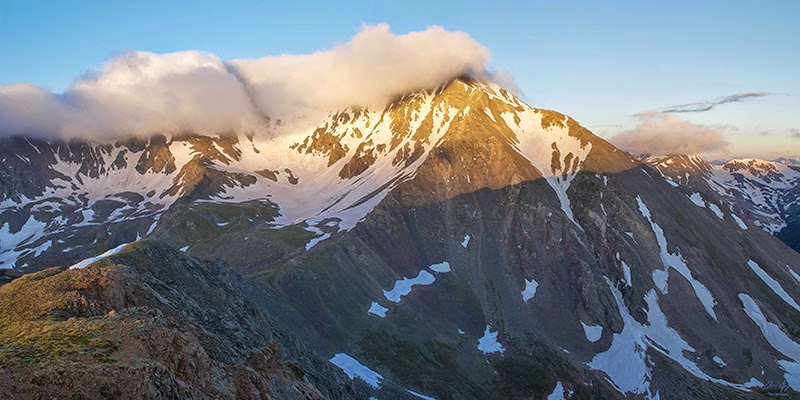 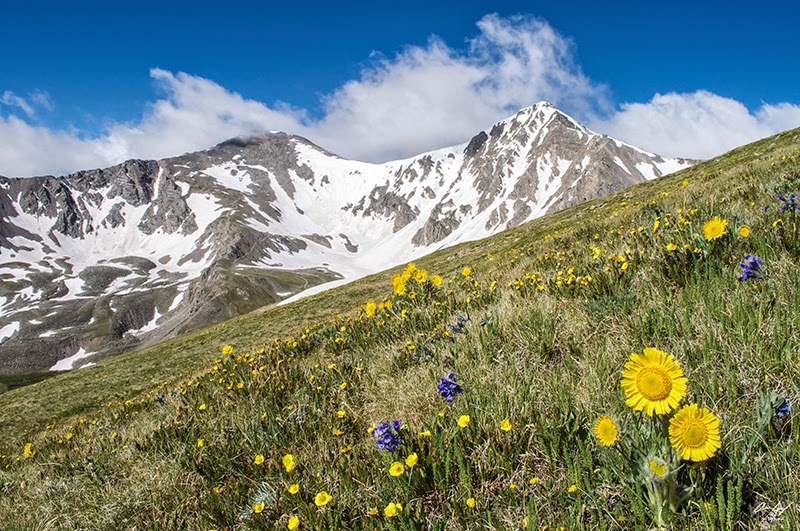