I'm glad we took Kenton's truck for this crazy ride up the infamous Lake Como road in the Sangre de Cristo Mountains.  Pretty sure I would have just parked at the bottom of the road and hiked an extra 3000 ft. of elevation gain had I brought my own truck.  The road is crazy nasty and filled with what other hikers refer to as "baby head" rocks (they're about the size of a baby's head).  So we start up the road slowly in Kenton's small pickup and realize that this trip is going to take a while.  It's so bumpy!  After a couple minutes, Kenton just says, "forget this!  I don't care about this truck anyway!"  Then he proceeds to crank up some Metallica and starts just plowing over the rocks.  Kenton and I are hanging on and trying not to bang our head on the windows.  Poor James and Molly in the back had nothing to hold on to.

I attempted to capture a video of the drive up:

We finally reached one of the obstacles at one of the switchback and pulled off the road to start packing in. 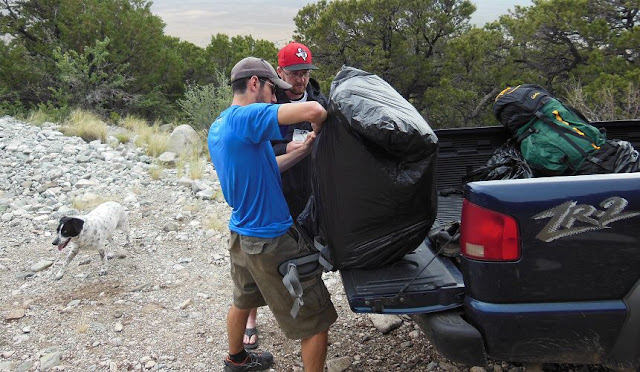 We hiked for a little while until the storms came in.  Then we threw on our rain gear and continued in the rain until we reached the lake. 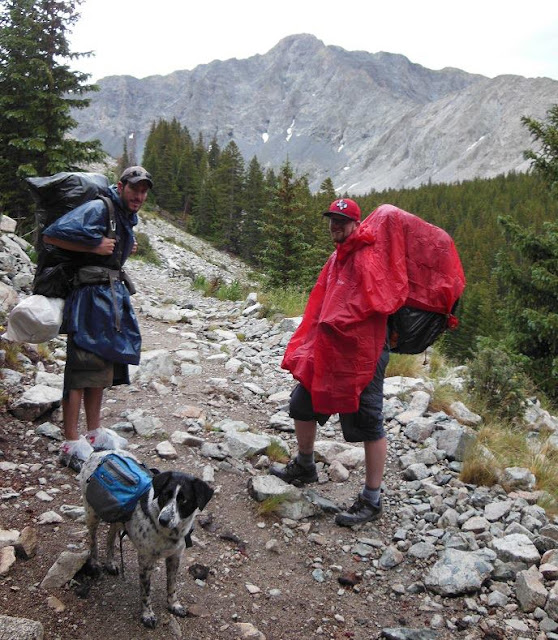 Right as we reached the lake, the rain stopped just as the sun was setting.  The sun dipped right between the clouds and the horizon for only a moment and lit up the face of Little Bear Peak with some of the most intense light I've ever seen.  I pulled out my camera and ran full speed to the lake to capture the scene.  It was amazing!  Once in a lifetime!  The light only lasted a minute or so tops.  A large print of this photograph is hanging in the Ft. Collins Front Range Community College campus in their "Little Bear" building (The buildings are named after different Colorado 14ers): 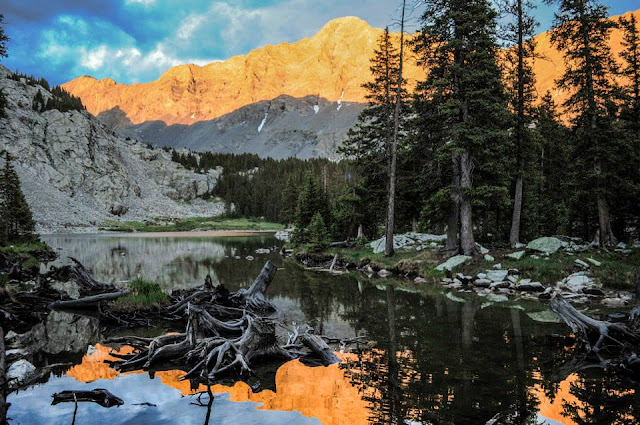 The next morning we woke early and headed toward Blanca first.  I didn't realize how scenic this hike would be.  There must have been dozens of small alpine pools and tarns and waterfalls along the way.


As we started gaining elevation toward Blanca, our feet started slipping.  The rocks were covered in a thin layer of verglas from the rain the night before.  As we approached some exposed switchbacks, James decided that the slippery conditions were making him uncomfortable.  He decided to wait for the sun to arrive so it could melt the ice.  Kenton and I pushed on.  These peaks really make you feel like you are on top of the world!  They contrast from some of the other Sawatch peaks we'd done recently where the terrain around you is all rolling hills and not so dramatic.

We descended back to the starting point for Ellingwood Point.  We almost went down too far, but another hiker pointed us in the right direction.  The hike/climb up Ellingwood was very steep and tiring.  We were trying to hurry as well because it was getting late in the day and we wanted to avoid storms.  The views of Blanca and Little Bear are awesome from here:


Back at camp we were fortunate enough to run into an 80 year old guy who had just finished climbing Blanca peak.  We visited with him for a while and listened to some of his mountaineering tales.  I can't imagine the determination and physical ability it takes to do something like this at 80 years old.  It's amazing what people can accomplish!

We decided to camp out another night and head home in the morning as we were so tired.  The next day we took a quick side trip to check out the Great Sand Dunes.