A Semi Epic - Grizzly Peak D in a Blizzard

Date Climbed: March 30, 2011
Hikers: Clayton and I
Round Trip Mileage: It was supposed to be 5.5 miles, but we unintentionally covered more ground than that.


First off, I apologize for the poor quality of the pictures as my camera froze and I had to use my cell phone (not that it would have mattered much as we couldn't really see anything).
I don't know why we decided to climb Grizzly Peak when we did. The weather forecast said 80% chance of snow with wind gusts of up to 65mph. I knew that this was a fairly simple/straightforward hike. Clayton had done it before in the winter and he said that most of it followed a ridge line. But the one thing we didn't take into account was visibility, or lack there of.
We parked the truck at the loveland pass trailhead and just sat there thinking, "this is crazy" (at least I was thinking that). It was a blizzard. Very windy and snowing. We bundled up and headed toward pt. 12,915. It was fairly easy to know where to go on the way up because you are always heading toward the next highest point. The way down, however is where we would later get confused. At one point on our way up, we had to scramble up a rocky low class 3 ridge to avoid a cornice and before we knew it we were on top of Cupid. At times the snow would provide us a window just long enough to see the shadow of Grizzly. Clayton asked,"should we go for it?" 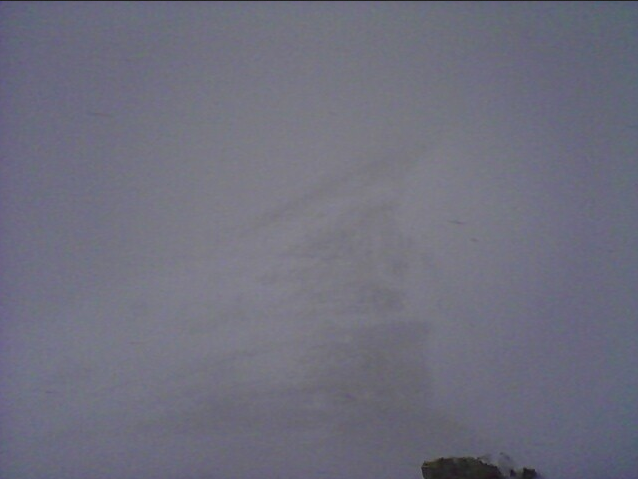 can you see it?

Once we reached the top, we sat down next to the wind shelter. We ate our sandwiches and slim-jims trying to keep our hands warm. I pulled out my camera that didn't work because it was too cold, so I snapped some shots with my phone which worked only because it was in my pocket and used my body warmth. There were no views.

The wind was intense, it was very cold and I decided that this was the least satisfying summit ever. 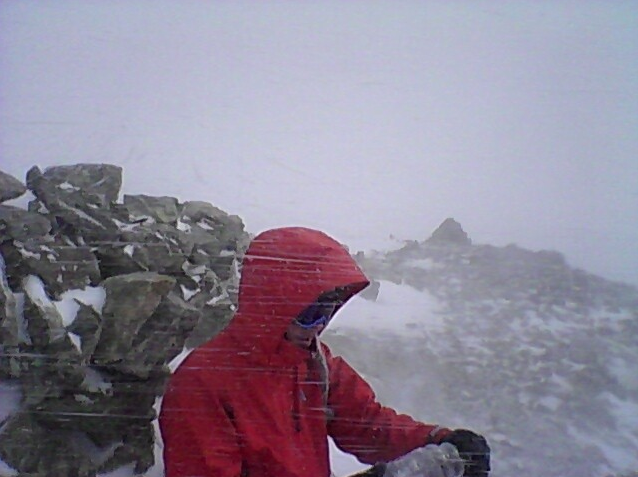 As we left the summit I noticed that it was a little less steep than when we were climbing. We quickly realized we were going the complete wrong direction and had to resummit to get back on the right track. The problem was that the visibility was so poor...at times maybe 30 ft. or so. With nothing to see and no way points to keep track of, we often got disoriented. All we could see was white. We couldn't even tell where the sun was at this point. Sometimes there were snow ledges that we would walk up on and we would have to look really hard to tell the difference between the snow and the sky. We headed down toward the Grizzly/Cupid saddle. 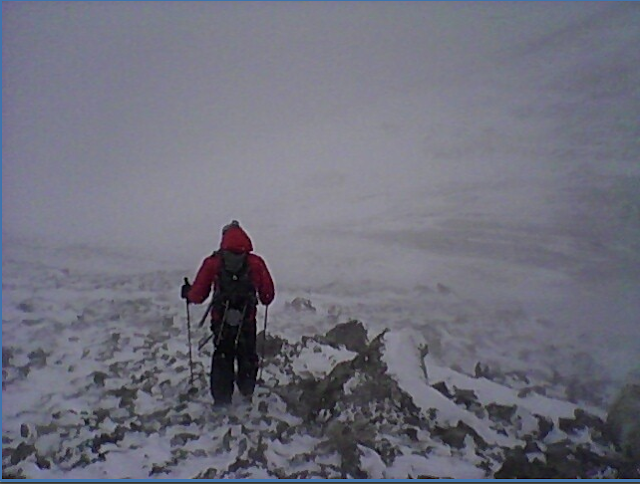 We finally resummited Cupid at about 1:30. We kept going down until we were at an open area that we didn't recognize. We couldn't tell which way to go. We tried my compass, but it was not working well as it had a big bubble in it. At this point we had to stop and make some choices. We decided on the direction we should go and climbed down the mountainside to the bottom of a saddle to somewhere. However, as we descended, we noticed that we were crossing deeper snow than we had crossed coming up. Could the storm have dumped that much snow over the fairly dry trail we had just crossed only hours before? After stopping, thinking, and talking it over, we decided that we were not where we were supposed to be. We considered just trying to head west which would eventually bring us back to Hwy 6 sooner or later, but again, my compass wasn't very reliable and we didn't know what kind of terrain we would run into. Our other option was to just re-climb the mountainside we just descended. We chose to hike back up to where we came from and pick a different direction from there.
Both of us were getting a bit nervous at this point and trying to think clearly about our situation and trying to make the right decisions. I was getting very frustrated at the poor visibility and the relentless wind. At times it was very hard to tell which direction we were going and which direction we came from. I was beginning to have worries that we were going to have to build a snow cave and huddle together all night for body warmth and how miserable that would be (no offense Clayton ") We also thought that we were losing daylight fast, but the truth is, it was only 2:30 or 3 in the afternoon. the snow was just blocking out the sun and making it dark which made me worry more. Then I was having thoughts of our wives worrying about us and search and rescue coming out to find us and the embarrassment that would cause us, not to mention the price it would cost. I have always heard that it is important when you get lost to not panic and stop to think straight. That is definitely good advice. I would add to stop and pray as well is equally important.
We reached our high point and chose a different downhill direction. Once we thought we were on the right track, we would keep moving forward hoping the direction we were taking would lead us to something we recognized. Every so often we would lose our place and would have to stop and think about where we were and what our next moves should be. We got disoriented multiple times and had to back track multiple times just like this. This went on for a good 2.5 to 3 hrs. Finally we found a few wind shelters along what seemed like to be more like a ridge. Getting more confident (or just more hopeful) we continued. Finally, Clayton yelled, "Trail!" and we found the trail. We were'nt even sure if this was OUR trail, but at least we knew that the trail was going to lead somewhere!
It seemed to take much longer than it should have on the way back up to pt. 12,915. Finally on our way back down toward the road the winds picked up to the extreme! I have never felt such a strong wind in my life. I felt like if the wind was any stronger it would have literally lifted me up into the air like a human kite. We tried our best to cover our faces and keep warm as we moved against the uphill gusts. We had to battle to move DOWN HILL! Clayton guessed that the winds might have been up to 80mph. I don't know if that's true, but it was pretty stinkin' powerful! I would really like to know exactly how strong the wind actually was by measurement, in whatever way people measure the wind in miles per hour. Though this was the most uncomfortable part of our climb, we were so relieved to know that we were heading back to the road.
I kept my face mask (bandanna) on most of the day. Though one area must have been uncovered as I had a small spot of mild surface frostbite on my cheek. Clayton's face was uncovered more often than mine and his frostbite was much worse, but still only mild and didn't cause any permanent damage. 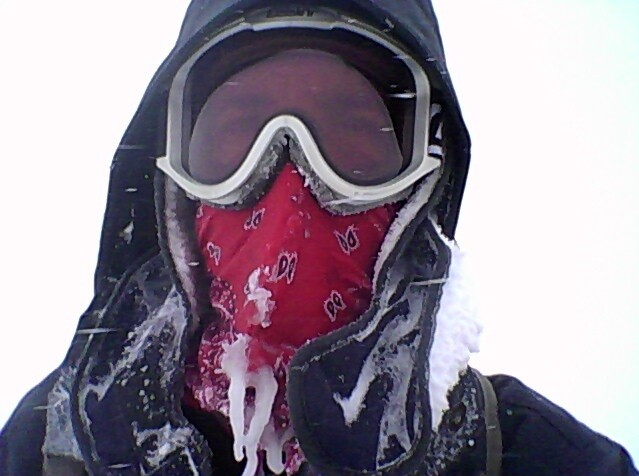 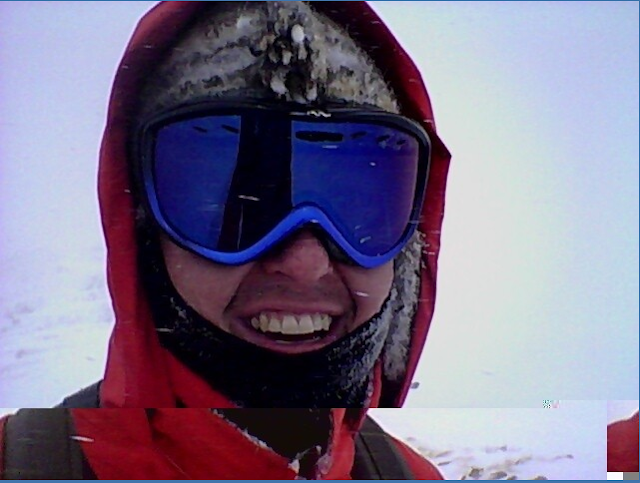 ice sickles on the face


Having Fun!
We were so happy to be back at the truck! We were amazed at the 60 degree weather driving back through denver that evening. This trip was a good and scary learning experience. Even an easy summer hike can be quite difficult in winter conditions.
A few lessons Clayton learned on this hike:
1. Next time bring a GPS
2. Keep important things such as water bottles and electronics close to your body so they don't freeze
3. Bring a map of the area
4. Bring a lightweight snow shovel in case you get lost and need to dig a snow cave to stay the night in
5. Cover your face completely when hiking in brutal conditions.
6. Make sure you have friends with slim-jims to share.
7. Make sure your compass and other equipment are in good condition
8. Make sure you are more familiar with the area if your going to hike with poor visibility
A few lessons I learned on this hike:
1. If it's snowy and windy, don't go hiking