Grandma and Grandpa were kind enough to take KD overnight on Thursday so Cami and I could get out on a quick day trip.  Mt. Elbert was Cami's first attempt at a 14er 6 years ago and she only made it to just above treeline on that hike after moving here from Nebraska.  It's been one of her goals to get back out and try to reach the summit of Colorado's tallest mountain ever since.  The weather forecast was about as good as it gets with 0% chance of afternoon thunderstorms.  We decided it would be crazy not to give it a try!

We slept in the back of the truck at the Halfmoon trailhead and started around 5:30.  We went at a nice, slow, easy pace knowing that we had all day to reach the top.  Cami was a little nervous about not being acclimated enough to reach the summit and feared another failed attempt.  This would be the most elevation gain she'd ever hiked in one day.  I was pretty sure she'd be able to make it.  She and I had just finished a 60 day PiYo workout challenge to help train for these hikes.  Cami recently became a Beachbody fitness coach, which basically means that I have recently become her workout guinea pig.  Whatever new exercise video she tries out, I try out too.  Whatever new healthy recipe she tries out, I eat it too.  I'm not complaining though.  It's actually been very helpful and since finishing this last video workout series I feel much better and have lost the pain in my lower back when hiking!

Anyway, turns out that she's probably in the best shape she's been since we've been married.  She had no problems getting to the summit!   The top few hundred yards of the peak were covered in snow, but it was easy to walk on using microspikes and poles. 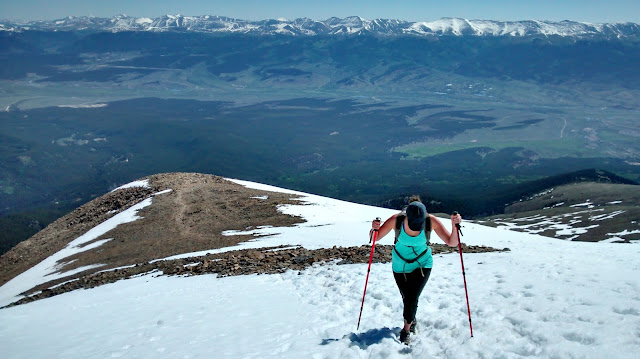 The views of the Sawatch Range were awesome this early in the season.  It was a wintery wonderland up there.  We must have been able to identify 25 or 30 other 14ers from the summit.  We cooked some Ramen and had a relaxing summit break.


And don't forget about the celebratory Whichwich picture on top.  Gotta get our free sandwich! 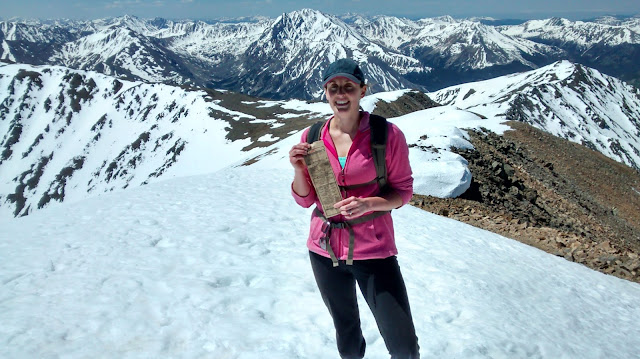